Driving on roundabouts makes me think of my friend Charee. Charee passed away the day before Thanksgiving this year.

Charee did not die because her body was sick. Well, it was sick when she died, but that’s because her brain killed it. Well, that’s not true either, her brain was sick. She was a young 58 year young woman who died from complications from Alzheimer’s.

I don’t know what symptom she noticed first. Whatever it was, the result was that she left the job she loved while at a career high, moved to a new town, and never felt able to work again. She even quit playing online board games with me about a year after she left. (And we had been playing online together for more than five years. Multiple games at a time…) 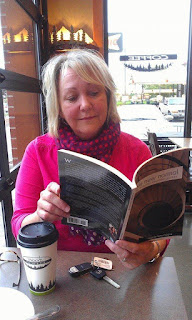 During a visit to town, early in her diagnosis, she made a short stop at her old job.

Afterwards, I took her out for coffee. (Greg trusted me for twenty whole minutes to not lose her.)

That’s when she told me the roundabout story. Before her formal diagnosis, she was driving in her hometown, she found herself in a roundabout and couldn’t figure out where or how to pull off. As she drove around and around she got more and more panicked. As I recall her telling, she pulled over and called her son to help her. Which, of course, being the great son that he is, he did.

I was lucky enough to visit her in Spokane twice. The first time, was not even three years later. She seemed to recognize me, and knew my name. (I was later told me that she had been “prepared” for my visit. They might have even showed her a photograph.) We walked a few laps around the interior of the facility, then we thought it might be nice to go outside. I noticed her hesitancy. We went to her room to switch out of her slippers into real shoes. There was a keypad to the door to get to the hallway from the main building to her room, the locked doors protected residents from “wandering.” Once in her room, she pointed to her shoes, sat down in her chair and stuck her feet out at me. After a moment, I realized she wasn’t kidding. I took a shaky breath to keep me from crying, and I changed her shoes. We walked around outside a bit. I pointed out a resident’s window filled with solar flowers, dancing back and forth. Charee smiled. 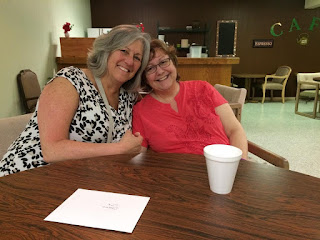 We returned to the facility and as we sat on a couch by the front door, I asked her if she was scared. And then she started to cry. She quickly stopped herself and changed the subject to other things. I told her stores of former co-workers, with each story she smiled and gave a little laugh. When I was describing one of them by “reminding” her of their spouse’s name, she snapped at me in good humor, “I know who he is Marla! I haven’t completely lost everything yet.” And she laughed, breaking the tension.

For the past many months, she has been mostly unresponsive. When I went to see her the summer of 2019, I knew it would be for the last time. I found her in the solarium, waiting for, what? Lunch. Did she even know why she was here, if she even knew where “here” was?

I was holding her hand with one hand, I swear she
was nodding her hand "yes" when I asked her if
she was going to kick my ass at the gym.

By then, she basically had no use of her hands or legs, and was leaning back in a reclining wheelchair. She had lost language. I saw a spark of recognition in her eyes. Did she know me? Have a faint memory. Or did she think I was bringing lunch?

Before she left Whatcom County ten years ago, we had gone out to lunch together. We knew at that point that she was leaving her job, and that I was headed into some very intense surgical procedure. At the end of the meal, she grabbed the check. I looked at her in shock, and she said, “you pay next time.” I told her I would owe her forever. That day, in solarium I challenged her to kicking my butt in the gym. I leaned over and said in her ear “I’m here to take you to lunch. I owe you, remember?” And she laughed.

I decided to share this on social media, even though it's a personal reflection. There are folks who follow this page who might know my friend Charee. If you did know her, then you know that when Charee had your back, you could never fail. If you didn't know her, maybe you have (or are) a friend like that. When Alzheimers came for her, her level of strength and joy was never diminished. I know her passing brought her peace.

She was one of the people who supported me emotionally from diagnosis of my acoustic neuroma, to treatment, to writing my book. When she was on KAFE radio at the end of 2010, she and her on-air partner Dave welcomed me to talk about GIMMEAMINUTE on the radio. They even got their own Minute for being Role Models. (sorry about the auto captioning...) I have those audio files but they're about  ten minutes long. I basically talked about myself and did the Role Model minute live and in person.

Charee got her own Shari's Minute for it being her last week on KAFE.

I will miss her spirit. Godspeed dear friend. I will hold your memory with me always.

Labels: Happy Not Your Birthday

If I Were Only On The Actor's Studio

In memory of James Lipton.

2. What is your least favorite word? - cancer

3. What turns you on? acceptance

4. What turns you off? - intolerance

5. What sound or noise do you love? ocean waves

6. What sound or noise do you hate? - metal scraping against metal

7. What is your favorite curse word? - fuck head

8. What profession other than your own would you like to attempt? - therapist

9. What profession would you not like to do? - foot surgeon

10. If Heaven exists, what would you like to hear God say when you arrive at the Pearly Gates? - You did enough.


Posted by Marla Bronstein at 5:42 PM No comments:

About two years ago, I started regularly reaching out to people to let them know how I felt about them. This is how it started. One at a time for every day for a week, then randomly. It’s been since April and that WAY TOO LONG.

When the email came this morning, letting me know the health diagnosis, I simultaneously caught my breath in panic and in gratitude. Because I don’t have to wait for the email telling me another long time friend has passed away to make me conjure up fond memories.

I can tell you right now, because every one of your minutes should be filled with nothing but love and light coming your way. I have known you since I was in the 2nd grade. I was probably 8 or 9 when you were divorced and moved away with my best friend and the others. It was the first time I had a long distance friend.

That relationship with you that I had at such an impressionable age was life-changing. You were the first “cool mom” i ever knew and I learned a lot about “being” from you.

Your daughter was the first person I ever knew with hearing loss. The impact of that on me is beyond comprehension, as I have worked with the Deaf community for years and now also suffer hearing loss as an adult.

Your parents were the most generous strangers I ever was blessed to visit.

Your tenacity and strength was (and remains) inspiring.

Words are not enough, but thank you. I wish you peace and good health.

Posted by Marla Bronstein at 3:22 PM No comments: