If I Were Only On The Actor's Studio

In memory of James Lipton.

2. What is your least favorite word? - cancer

3. What turns you on? acceptance

4. What turns you off? - intolerance

5. What sound or noise do you love? ocean waves

6. What sound or noise do you hate? - metal scraping against metal

7. What is your favorite curse word? - fuck head

8. What profession other than your own would you like to attempt? - therapist

9. What profession would you not like to do? - foot surgeon

10. If Heaven exists, what would you like to hear God say when you arrive at the Pearly Gates? - You did enough.


Posted by Marla Bronstein at 5:42 PM No comments:

About two years ago, I started regularly reaching out to people to let them know how I felt about them. This is how it started. One at a time for every day for a week, then randomly. It’s been since April and that WAY TOO LONG.

When the email came this morning, letting me know the health diagnosis, I simultaneously caught my breath in panic and in gratitude. Because I don’t have to wait for the email telling me another long time friend has passed away to make me conjure up fond memories.

I can tell you right now, because every one of your minutes should be filled with nothing but love and light coming your way. I have known you since I was in the 2nd grade. I was probably 8 or 9 when you were divorced and moved away with my best friend and the others. It was the first time I had a long distance friend.

That relationship with you that I had at such an impressionable age was life-changing. You were the first “cool mom” i ever knew and I learned a lot about “being” from you.

Your daughter was the first person I ever knew with hearing loss. The impact of that on me is beyond comprehension, as I have worked with the Deaf community for years and now also suffer hearing loss as an adult.

Your parents were the most generous strangers I ever was blessed to visit.

Your tenacity and strength was (and remains) inspiring.

Words are not enough, but thank you. I wish you peace and good health.


Posted by Marla Bronstein at 3:22 PM No comments:

The Day Tacoma Rocked my World

My friend Patrick turned me on to The Kinsey Sicks over ten years ago. The first time I heard “Oy Vey In A Manger” I knew I was hooked. When they appeared at the Triple Door in Seattle a few years later, Ken and I got tickets. We sat next to a kid who wasn’t even 21 yet. We struck up a chat and have remained in intermittent contact since then.

When I heard they were going on tour this year, and that it was “Rachel”’s (Ben Schatz’) retirement tour, I knew we had to go see them again. But wouldn’t it be awesome to bring them to Bellingham??? After a few miles of groundwork, I realized that bringing them to Bellingham was going to suck the joy from my life, so I committed to buying tickets for their Tacoma show, 90 miles away.

Front Row Center at the Rialto Theatre for the Tacoma Arts Live program was not as expensive as I would have thought…and they were mine. I purchased the tickets in January, the day they went on sale. All I had to do was wait for July 19. For months, I had the wrong date in my head. Thankful for a FB interaction with one of the Kinseys who confirmed our event date was the 12th, and not the 19th.

We got to the concert after a LONG 90+ mile, Friday afternoon commute. We got to our seats, right up front and center, me in my T-shirt of Kinsey Sicks swag. Bonus was my lifelong friend Susie was in the audience as well... Neither one of us knew the other was going to be there. What a wonderful surprise to get to hug her that night!

The show was awesome. “New Winnie” was wonderful. Trixie sang as lovely as ever. Trampolina was more beautiful than I remembered and Rachel was healthy and rambunctious.

Towards the end of the show, Trampolina came off the stage, walked right up to me and held her hands out to me. As I took her hands she pulled me up I found myself being led to the stage. I started to hyperventilate and thought I might pass out, but I slowed down my breathing so I could pay attention to everything. Winnie took my other hand and they led me up the side stairs to where Trixie was waiting with scarves and other sparkly things to adorn me, and apparently my head, from the photo evidence. 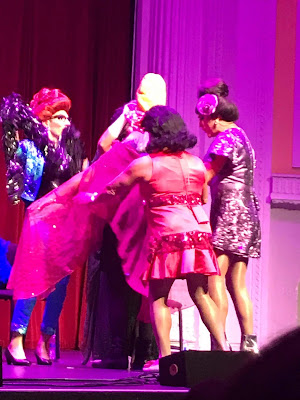 They sang, I smiled. Really really hard. No seriously, my face HURT for the whole next day. 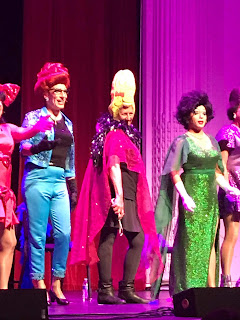 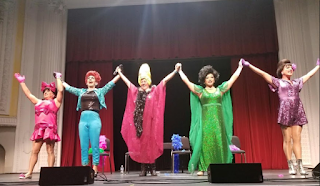 When I looked out into the audience, I noticed Ken had his phone pointed towards us..I thought he videotaped the whole thing, including my fancy footwork dancing with the ladies. Alas, all he caught was the final beautiful, perfect note in harmony.


Last week was a crappy week. For a lot of reasons I’m not going to get into here. But Friday night made me forget about what a crappy week last week was. Reality is back but I know that I will still be able to smile and laugh and love again.
Posted by Marla Bronstein at 12:13 PM No comments: