Just so you know,, I am only doing this as a birthday gift to Stennie, I should be cleaning my house because my mother is coming from Hell, USA, AKA Arizona, via Burbank…what a trip that must be! Here’s what you do….Go to Wikipedia, and in the search box, type the month and day of your birth (not the year, though). From the search results that come up, post five events, five births and five deaths from that day.

OK, so I suck at following rules….since I couldn’t narrow it down, and since I am blessed with sharing my birthday with many many election days, I take artistic license.

Events
• 1852 - Count Camillo Benso di Cavour became the prime minister of Piedmont-Sardinia, which soon expanded to become Italy. I don’t know why this is important to me, I guess because I used to live in Piedmont CA…
• 1861 - The University of Washington opens in Seattle, Washington as the Territorial University Go Huskies!!
• 1884 - U.S. presidential election, 1884: Democrat Grover Cleveland defeats Republican James G. Blaine in a very close contest to win the first of his two non-consecutive terms. Mentioned in “You Can’t Take it With you….as if Muzzie looks old enough in 1935 to have voted in 1884….
• 1918 - World War I: Austria-Hungary surrenders to Italy. Thus moving my great grandparents to America.
• 1921 - Japanese Prime Minister Hara Takashi assassinated in Tokyo. Is this why I love sushi?
• 1924 - Nellie Tayloe Ross of Wyoming elected as the first woman governor in the United States. You go girl!
• 1948 - T. S. Eliot wins the Nobel Prize in Literature. Probably for writing that silly cat poem.
• 1970 - Genie, a 13 year old feral child was found in Los Angeles, California having been locked in her bedroom for most of her life. Had a powerful effect on my view of the world an other people, I learned I really did not have bad parents.
• 1980 - U.S. presidential election, 1980: Republican challenger Ronald Reagan defeats incumbent Democrat Jimmy Carter by a wide margin. One of the worst birthday gifts I ever received, until 1995…
• 1995 - Israeli prime minister Yitzhak Rabin assassinated by an extreme right-wing Israeli.
[
Births
• 1879 - Will Rogers, American humorist (d. 1935) I like to think I have a little connection due to birth date.
• 1916 - Walter Cronkite, American news broadcaster ditto.
• 1918 - Art Carney, American actor (d. 2003) double ditto
• 1961 - Kathy Griffin, American comedienne. Love Her. I have 2nd row seats to see her in January…do you think I should tell her? Do you think I wouldn’t?
• 1969 - Sean Jean "Diddy" Combs, American rapper Oh yeah, that’s comforting..

Holidays
• Roman Catholic Saints - Feast day of the following Roman Catholic saints:
o Saint Charles Borromeo I wonder if this is why I feel the urge to volunteer
o St. Emeric He died in a hunting accident at a very young age, was canonized, and many miracles were reported at the site of his tomb. Why is that important..Amerigo Vespuci was named after him. There is the basis for Catholicism to rule the USA.
Posted by Marla Bronstein at 11:21 AM No comments:

My 70-something year old undle submitted this to the OpEd section of the New York Times...just in case you don't catch it there...

It must feel like the world is closing in on you from all sides. Pakistan, Iraq, Iran, Korea are rising up as clear and visible threats and adversaries. Your administration is under constant fire; Rumsfeld, Cheney, scandals along with claims of mismanagement and the protest against the war from former US Military Generals and Administration Officials. There is a deafening out cry throughout the Western World against what they perceive as US aggression. A “brush fire” exists in every direction that you turn. And, you were recently described as a “Devil” during a speech in the United Nations. You are the butt of jokes by mid night comedians. I would almost feel sorry for you if it weren’t for the fact that it is self inflicted.

Although 9/11 was a defining moment in US history for the struggle against terrorism you lost site of the enemy. You had it right when you went into Pakistan for Osama Bin Laden and then it all went to hell. Now you attempt to sell the Iraq war by creating fear and the increased threat of terrorism which your own actions have indeed created. They sold Vietnam with the Domino Theory and we lost. You are selling this conflict with fallacious arguments as you have done very little to protect our homeland; our ports, our refineries, our nuclear plants, our air cargo; while spending trillions in Iraq.

I am a proud American who served his country as an officer in the United States Army. I cry now for every young person, Iraqi and American, who dies in this unnecessary war. I, along with millions of other patriotic Americans, seek to renew our pride in our country. Only our leadership can do that.

OMG I was speechless!!

Tonight was the Bentleys, when the BTG congratulates itself, and even though deep down in my heart I know these awards are somewhat arbitrary and political and don't mean that any one show was better or worse than another...it sure felt good to hear my show called out seven times....we received awards in the following categories:

I got up and thanked my directing mentors, T and A, (I dragged T on stage with me) and when they called out "Mattress" for best show, I could not even speak...I know, shocking huh?

Thank you universe, for my 15 minutes. I truly appreciate every one of them
Posted by Marla Bronstein at 10:50 PM 3 comments:

Little brother and his best friend find productive things to do with their time as they ready themselves for school.
Posted by Marla Bronstein at 5:36 PM No comments:

The women's group just won't be the same without Krizzer, who moved from the Ham to study to clean teeth and take pictures of cavities down in the Emerald City. as your friend with benefits, I expect at least one free cleaning...hee hee...here are some pics of our "last" night at the c-clamp...no tears now... 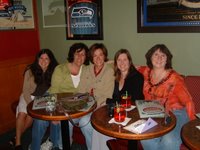 The girls one last time.... 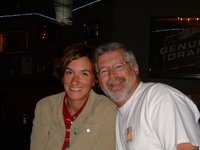 Look who showed up for one drink with us!!

And the cute boy who loves and supports her through it all.... 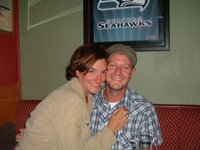 A DAY LATE AND A DOLLAR SHORT

So of course I procrastinated (again) but truly, I had been thinking about this list quite a bit. I wrote down the titles while on a road trip to Pasco this past Saturday with G and Z…I think you’ll be quite pleased. Even if it does go out in the mail on the 12th....Stennie thought this up. Or at least she set it up. Or at the very minimum, she posted it up, and I bit.

I have already received and listened to three of the five I received. I hope those of you who played recieved my copies...

Here are my choices for to CD 2.

1. A song you like to wake up to. “Here Comes The Sun”-The Beatles It’s also the first song I play when I re-set up my stereo, wherever I live.

2. An "earworm" -- a song that gets stuck in your head all day if you hear it once. “Take it to the Limit” The Eagles….this song gets stuck ALL THE TIME aaarrrrgghh!!

3. A one-hit wonder. “Baby Don’t Hurt Me” Haddaway…Little Brother and his best buddy are planning a dance for the talent show this spring. They have already started the video. I promise to load it as soon as I figure out how.

5. A traveling song. This can be a song about traveling, or a song you like to listen to while traveling. “On the Road Again” Willie Nelson.

6. A song you like that your mother would also like. “Up and Down Lullaby” Karen Reitz…I know this is kind of unfair. Karen is a neighbor of mine, and I actually gave my mom a copy of her CD and I know she likes it.

8. A song you like to play when you're pissed off. Either to cheer yourself up, or to let off some steam. “Tristan’s Moon” David Weiss…it calms me.

10. Song from your favorite music video. “Thriller” M. Jackson. I don’t like this guy as a person but I do love this video.

11. A song from TV. It could be a theme song, or from a TV soundtrack, or even a commercial. . OK, this story is amazing….we’re driving, playing this pick your favorite song game, and I ask G to name a song from TV. After about a minute, he’s sort of hitting his temple saying, “oh what is that song?”. And I said, “You know what I love?” and I started singing the Theme from the Courtship of Eddie’s Father this song. AND YES, THAT WAS THE SONG IN HIS HEAD TOO!!! That’s one of the many reasons we are best friends. However, I could not figure out how to transfer the song from my IPAQ to the CD, so I took my handy-dandy cartoon CD, and …so here you have the theme song from my favorite cartoon of all time the Flintstones

12. A kick-ass cover song. “Every little thing he does is Magic” Shawn Colvin

13. A song you've "played out." I would say “Unwritten” but it was my favorite song on my first CD compilation. The radio stations have played it to death. I’d sell the CD, but there are other songs on it that I like. I’m not telling anyone though; they’ll ruin it for me. So the song for this selection is “More than a Feeling” Boston

14. Song about one of the Seven Deadly Sins (Anger, Greed, Lust, Envy, Sloth, Gluttony, Pride). “That wasn’t Me” Todd Thibaud

15. A song that makes you cry. “Tears in Heaven” Eric Clapton. This came out right after Ken’s neice was killed in a car accident. It was horrible.

16. A song about a real person. “Goodbye Earl” Dixie Chicks (with a disclaimer that they never killed anyone)

17. A song about music. “Piano Man” Billy Joel I have to have one BJ song on every CD, right?

18. Song with a one-word title. “Single” Natasha Bedingfield I know that I am tempting fate here…but I do like the message. I suggest you gift it to all the adolescent women in your lives

Funny Talk for a Friday

I don’t know how you ladies do that….don’t you work for a living….OK, so both Stennie and Flipsy got it done before I even got home at 5pm…..I, however, am continuing to procrastinate from working on my CD, which I haven’t worked on since I’ve been in rehearsal. I am nothing if I’ m not full of excuses…anyway, enjoy.
Play if you feel it.
1. Soda, Soft Drink, Soda Pop or Tonic – Soda.
2. Hoagie, Sub, Po Boy, Grinder – Poor boy…I didn’t even know what a grinder was until I was in college
3. Goobers or Peanuts – Peanuts
4. Candlepin or Ten-Pin bowling – bowling.
5. Dungarees or Blue Jeans – I have to admit I called them dungarees when I was a kid. Now they are jeans. Sometimes they are blue
6. Shopping Carriage, Shopping Cart, Buggy – Shopping cart.
7. Frappe or Milkshake – Milkshake
8. Jimmies or Sprinkles – Sprinkles.
9. Hot Dog or Frankfurter – Hot dog
10. Relative or Kin – relative.
11. Soda Crackers or Saltines – saltines.
12. Rubbish, Trash or Garbage – As my mom says…gawbage
13. Rotary or Traffic Circle – Roundabout. (go Flips!)
14. Barbeque, Grill Out or Cookout – BBQ
15. Funnel Cake or Fried Dough - Funnel cake. I don’t really know what it is…I just know what they call it in Lynden
16. Flapjacks, pancakes, or griddlecakes – Pancakes.
17. Bedroom Suite or Bedroom Suit – The Suite is the group of rooms, the suit would be the fancy schmancy negligees…
18. Bundles, Sacks or Bags (of Groceries) – They are all bags
19. Front Entrance or Front Stoop – Porch, if you mean in front of the front door.
20. Frying Pan or Skillet – Frying pan. Multiple sizes.
Posted by Marla Bronstein at 5:12 PM No comments: